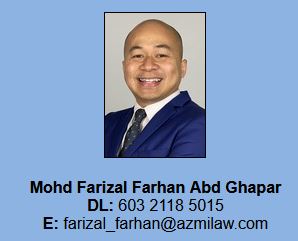 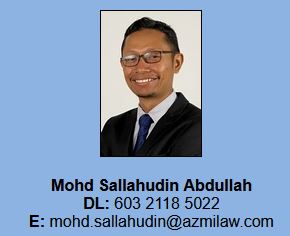 We are pleased to announce the appointment of Mohd Farizal Farhan Abd Ghafar as the 21st partner of the firm effective from 16 December 2020. The appointment is part of the Azmi & Associates continuing growth strategy to expand its practice in the areas of Construction, Energy, Oil and Gas. Farizal graduated from the University of Warwick, United Kingdom with a Bachelor of Laws (LL.B) (Hons) degree in 2007. He joined Azmi & Associates in 2007 as an Intern and subsequently, as a Legal Executive. Upon obtaining the Malaysian Certificate in Legal Practice (CLP), Farizal undertook his pupilage at Shook Lin & Bok in 2011 before rejoining Azmi & Associates in that same year as an Associate. He was called to the Malaysian Bar and admitted to the Roll of Advocates & Solicitors on 23 December 2011.

Farizal is one of the emerging lawyers at the Firm with considerable experience in dealing with Construction, Energy, Oil and Gas matters. His promotion at the time of the Covid-19 pandemic is testament to both, his resilience and expertise. Throughout a substantial period of his career with Azmi & Associates, Farizal has been seconded as in-house counsel to a few of our renowned clients such as Petroliam Nasional Berhad, Petronas Chemicals Group Berhad and Hess Oil & Gas Sdn Bhd. He has acted for and advised a number of clients in major corporate exercises and the implementation of major construction projects mostly in the energy, oil & gas sector. Farizal had also worked for Avocet Mining (M) OHQ Sdn Bhd, a subsidiary of Avocet Mining PLC involved in gold mining activities in South East Asia and West Africa.

Together with Mohd Farizal Farhan Abd Ghafar, Mohd Sallahudin Abdullah has also been appointed as a Partner effective from 16 December 2020.

Sallahudin is one of the privileged generations of young partners who is truly home-grown in Azmi & Associates. He has started his legal career with us as a trainee solicitor in January 2012 after graduating from the International Islamic University Malaysia with a 1st Class Honours in his Bachelor of Law degree in January 2011. Notably, he was the recipient of the Rector’s List and awarded as Best Student Overall in IIUM Convocation Ceremony in 2012. He was also completed his Master of Law (Comparative Laws) in 2017 from International Islamic University Malaysia. On 21 January 2013, he was called to the Malaysian Bar and admitted to the Roll of Advocates and Solicitors. Sallahudin is a valuable asset to the Projects Practice Group (“PPG”) which is one of the top-performing and fast-growing practice groups in the Firm. Sallahudin has always been at the forefront of the PPG as he has always been able to connect with clients on a personal level. He has extensive knowledge in advising big corporates. He has advised on various Government Link Companies including Sime Darby Property Berhad, Malaysian Resources Corporation Berhad, Worldwide Holdings Berhad, TDM Berhad, FELDA, FGV Holdings Berhad, Meridian Berhad and Employee Provident Fund (EPF) in their various corporate exercises. We believe this promotion will open further avenues for expansion for PPG and the firm.