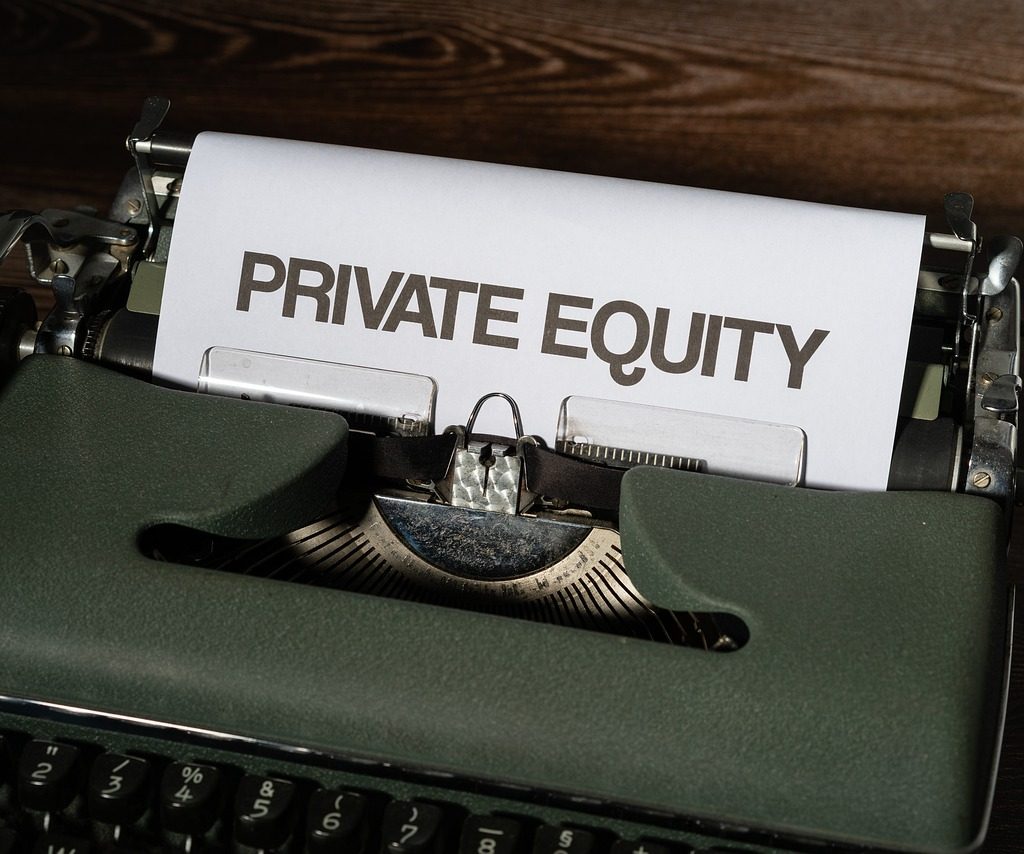 Development of Shariah-Compliant Private Equity and Venture Capital in Malaysia

In Malaysia, the development of Shariah-compliant VC was initiated by the recommendation of Bank Negara Malaysia under the Financial Sector Stability Master Plan 2001-2010.

For recent developments, in 2015, RHB Islamic Bank Berhad signed a collaboration agreement with Malaysian Technology Development Corporation to act as the custodian for the RM150 million funds entrusted by the Malaysian government.

At present, there is a significant number of PE and VC funds available in the market including CIMB Private Equity and Venture Capital, KFH-Private Equity, Navis Capital and others.

A corporation who wishes to undertake Islamic PE or VC activities must appoint a Shariah Advisor and ensure that the activities comply with the Shariah requirements.

Nonetheless, any investment decision, either local or abroad, must be endorsed by the Shariah Advisor to ensure its compliance with the general Shariah principles, standards or resolutions issued by the SAC or other recognized Shariah authority.

The structures which are commonly used in PE and VC funds are Musharakah, Mudharabah and Wakalah.

Musharakah is a common structure used in a Shariah-compliant PE/VC fund. Musharakah refers to a partnership between two parties or more to finance a business venture whereby all parties to the Musharakah contribute the capital.

The capital contribution can either be in the form of cash or in kind. If the venture is profitable, the profit will be distributed based on a pre-agreed ratio. However, in the event of a loss, the loss will be shared on the basis of capital contribution. A simplified Musharakah structure is stipulated in Figure 1. 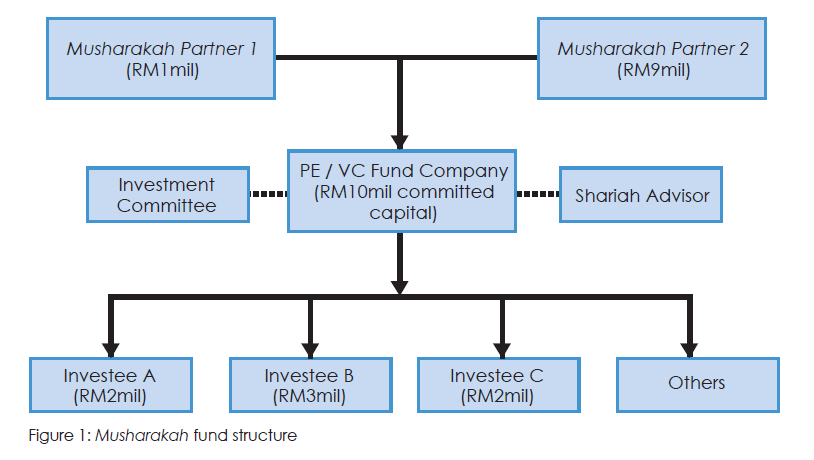 Mudharabah is another common structure used in a Shariah-compliant PE/VC fund. It is a contract made between two parties in order to finance a business venture.

The parties are a Rabb al-Mal, an investor who provides the capital and a Mudharib, an entrepreneur who manages the project/business. This is akin to a conventional PE/VC fund in the sense that there is a relationship between the investor and the manager. If the venture is profitable, the profit will be distributed according to the pre-agreed ratio. If there is a business loss, it should be borne solely by the investor, only to the extent of his capital contribution. 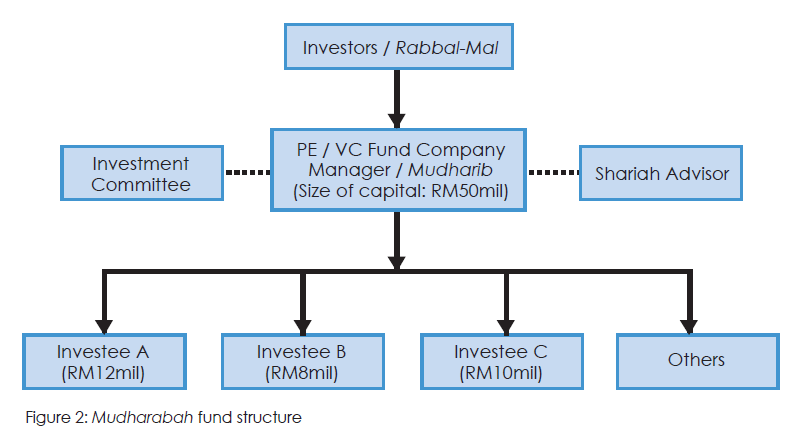 Wakalah is the most popular structure used in a Shariah-compliant PE / VC fund in recent years.

The Wakalah contract confers power and rights to the agent to act. A simplified Wakalah structure is stipulated in Figure 3. 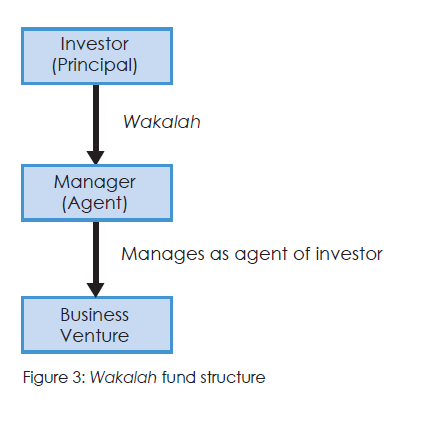 Both SPVs will ultimately invest in the PE / VC fund. In order to ensure full compliance with the Shariah principles, the Shariah-compliant investors should form the majority shareholders.

However, if the Shariah-compliant investors only form a minority, then they should ensure the enforceability of a strong shareholders’ agreement that guarantees Shariah compliance at all times. Nonetheless, in any event, at the level below the SPV (i.e. fund company and investee companies), sufficient reporting system should be in place for the Shariah Advisor to ascertain that the investment strategy meets the Shariah standards in particular the utilization of the funds is for Shariah compliant purposes. An example of a combined structure is stipulated in Figure 4. 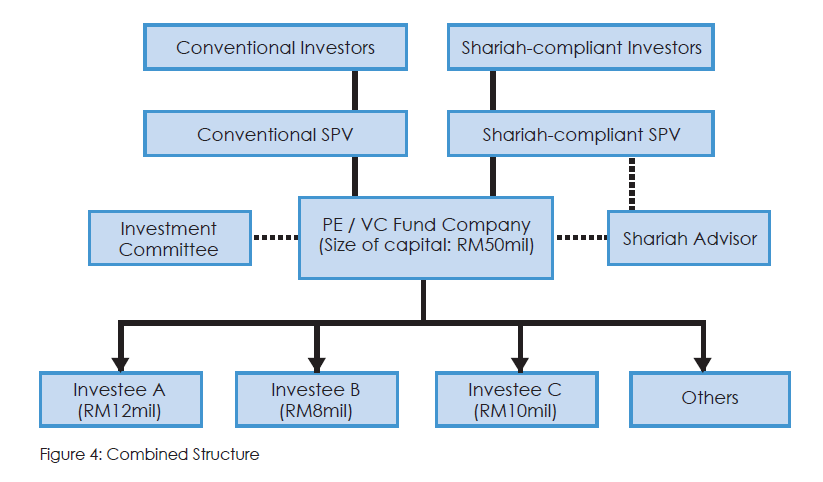 Parties involved in a Shariah-compliant PE and VC Funds

Apart from Shariah Advisor, lawyers are responsible in preparing all the agreements for the fund and also ensuring that the structure of the fund is in compliance with the regulatory framework, which will then be endorsed by the Shariah Advisor. Additionally, a PE / VC fund, whether conventional or Shariah-compliant may be required to appoint an auditor and also a tax advisor.

The Shariah-compliant PE and VC industry has developed significantly and became an alternative fund raising option for companies’ capital requirements.

One of the factors that contribute to develop this industry is the increasing awareness of its significance for economic growth and diversification. This industry has a lot of potential evidenced by growing demands for Shariah-compliant PE and VC.