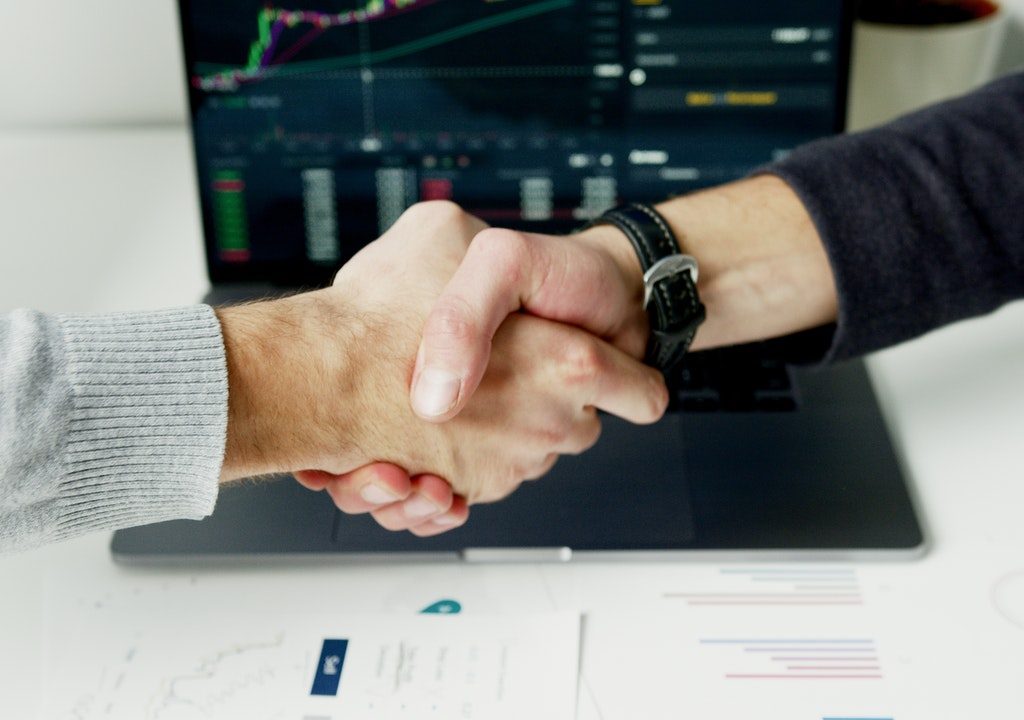 The Effect of Competition on the Merger of CELCOM and DIGI

On 6 May 2019, Axiata Group Berhad (“Axiata”) announced to Bursa Malaysia that it is in discussion with Telenor ASA (“Telenor”) to establish a new merged global entity which will combine the operations of Axiata and Telenor in nine countries, namely Malaysia, Thailand, Sri Lanka, Pakistan, Indonesia, Cambodia, Myanmar, Bangladesh and Nepal (“Proposed Merger”).[1] It is pertinent to note that out of the nine countries, both have presence in Malaysia through Celcom and Digi, respectively.

The proposed merged global entity, referred to as MergedCo, will be headquartered in Malaysia and will operate through its operating subsidiaries in the nine countries. Telenor will be the majority shareholder of the MergedCo with an anticipated 56.5% stake and Axiata will own the remaining 43.5%. However, this is preliminary and subject to adjustments and due diligence.

The MergedCo is expected to have a proforma revenue of more than RM50 billion, EBITDA (Earnings Before Interest, Taxes, Depreciation & Amortisation) of more than RM20 billion, control operating subsidiaries in 9 countries with a combined total population of more than 1 billion. They will have 300 million customers.[2]

1. Communications and Multimedia Act 1998;
2. Energy Commission Act 2001;
3. Petroleum Development Act 1974 and the Petroleum Regulations 1974 in so far as the commercial activities regulated under these regulations are directly in connection with upstream operations comprising the activities of exploring, exploiting, winning and obtaining petroleum whether onshore or offshore of Malaysia; and
4. Malaysian Aviation Commission Act 2015.

Hence, CA 2010 will not apply to the Proposed Merger as Axiata (Celcom) and Telenor (Digi) as their telecommunication business is regulated under the Communications and Multimedia Act 1998 (“CMA”).

The relevant provisions on general competition practices is provided under Section 133 to 144 of CMA. Section 133 of CMA provides that,

“A licensee shall not engage in any conduct which has the purpose of substantially lessening competition in a communications market.”

Although anti-competitive conduct is prohibited, Section 140 of CMA allows the licensee to request MCMC for authorization of the conduct, as follows: –

“1. A licensee may apply to the Commission, prior to engaging into any conduct which may be construed to have the purpose or the effect of substantially lessening competition in a communications market, for authorisation of the conduct.

2. Notwithstanding the provisions of this Chapter, the Commission shall authorise the conduct if the Commission is satisfied that the authorisation is in the national interest.

3. Before authorising the conduct, the Commission may require the licensee to submit an undertaking regarding his conduct in any matter relevant to the authorisation.

4. If the licensee subsequently withdraws the undertaking, the authorisation shall be deemed never to have been given for the purposes of this Chapter.

5. A licensee may withdraw an application made under subsection (1) at any time.”

It is interesting to note that after the announcement of the Proposed Merger, MCMC issued Guidelines on Mergers and Acquisitions dated 17 May 2019 (“M&A Guidelines”). MCMC clarified that the term ‘conduct’ in Section 133 of CMA also includes mergers and acquisition (“M&A”). The M&A Guidelines provides a summary on the applicable framework for M&A threshold to determine whether the M&A should be subjected to assessment by MCMC, as outlined in Table 1. 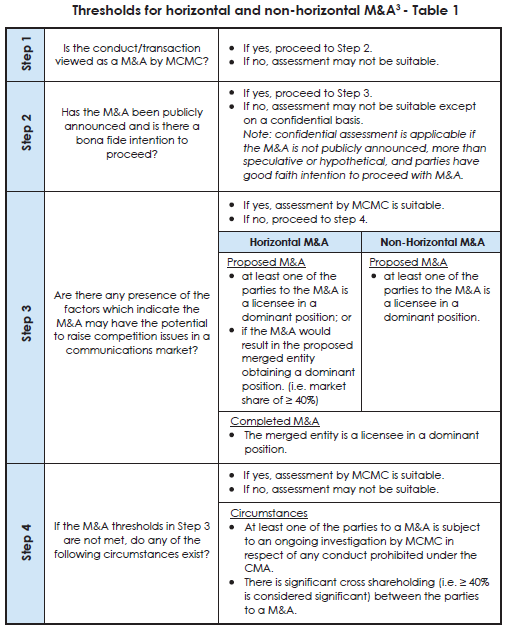 Further to the above, a dominant position in a communications market can be indicated if the merged or acquired entity is likely to have post- M&A market share of 40% or more (dominance threshold).[4]

On 11 July 2014, MCMC has issued its Guidelines on Substantial Lessening of Competition (“SLC Guidelines”) which provides the framework to assess a ‘substantial lessening of competition’ which involves a three-step process, as outlined in Table 2[5]. 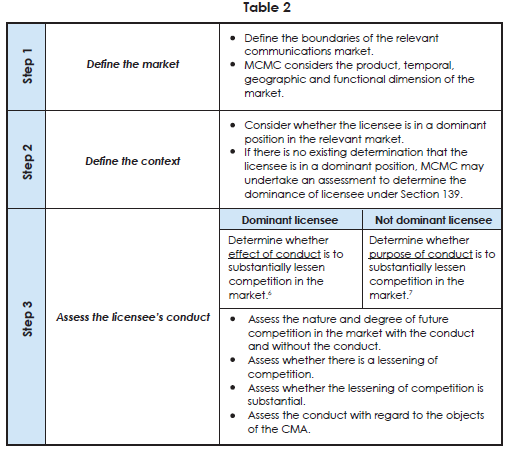 With special focus to M&A, MCMC will consider the several factors to determine the effect of M&A on competition under Section 133 of CMA, such as[8] : –

Analysis of the Proposed Merger

In general, the competition regime under the CMA addresses the conduct of licensee, particularly to conduct with the purpose of substantially lessening competition. Violation of Section 133 of CMA is punishable with a fine not exceeding RM500,000 or imprisonment for a term not exceeding 5 years or both, and a further fine of RM1,000 every day the offence is continued after conviction.[9]

Accordingly, the Proposed Merger should be scrutinized to ensure that it does not contravene Section 133 of CMA. Based on the various guidelines issued by MCMC, the Proposed Merger will fall under the scope of ‘conduct’ stated in Section 133 of CMA as the merger between Celcom (controlled by Axiata) and Digi (controlled by Telenor). This will trigger horizontal M&A involving firms at the same functional level of supply chain and both parties are involved in the same market i.e. mobile telecommunications.

Based on a report by Fitch Ratings, the MergedCo is expected to have a combined market share of 50% and total revenue share of 35% across the domestic fixed and mobile sectors, surpassing fixed-line operator Telekom Malaysia Bhd.[10] Therefore, notification and assessment by MCMC is required as the MergedCo is expected to gain a dominant position as its post-merger market share exceeds the dominance threshold of 40%. In view thereof notification and assessment by MCMC are required. MCMC will determine whether such conduct is anti-competitive and subsequently decide whether to issue a Notice of No Objection.

If MCMC considers the Proposed Merger to be anti-competitive, the relevant parties may apply for an authorization of conduct from MCMC under Section 140 of CMA.

It is pertinent to note that the authorization will only be granted on the basis of national interest even though MCMC is satisfied that the conduct is construed to have the purpose or effect of substantial lessening of competition.11 The national policy objectives stipulated under Section 3 of CMA serves as a guide on matters that constitute national interests.

Lessons Learned from Other Mergers in the Telecommunications Market

The conventional wisdom of mergers being associated with a higher price level for consumers is evidenced in Netherlands by the acquisition of Telfort by KPN and Orange by T-Mobile, and also in Denmark through the acquisition of Orange by TeliaSonera. In both countries, the market experienced a general price increase after merger, either by merging firms or its competitors or both.[12]

Nonetheless, mergers between firms in telecommunication markets may also result in positive effects such as increase in efficiencies. In Europe, almost all mergers undertaken over the last two decades resulted in efficiencies, either static or dynamic, but never both at the same time.[13]

Scrutiny by MCMC and Expectations by the Malaysian customers

MCMC has provided several guidelines to help firms assess their compliance with the general competitive practices under the CMA, especially the M&A Guidelines 2019. As a regulatory body, MCMC is responsible for scrutinizing and determining whether the Proposed Merger is competitively beneficial to Malaysian consumers. This is because weaker competition post-merger will lead to higher prices charged by the merging firms and/or their rivals after the merger. This further strengthens the importance of scrutiny by MCMC on the Proposed Merger. MCMC is expected to consider the learning lessons from similar mergers in other countries and come to a decision beneficial to Malaysia and the Malaysian consumers.