How to Determine “Market Dominance” Under Malaysia’s Anti Competition Laws

The Act applies to any commercial activity within and outside Malaysia, save for commercial activity regulated under the First Schedule of the Act. Upon finding of infringement, an enterprise infringing the Act may be liable to among others, a financial penalty that shall not exceed ten percent (10%) of the worldwide turnover of an enterprise over the period during which an infringement occurred.[2]

Overview of the Key Provisions of the Act:

The core sections of the Act are Section 4 and Section 10 respectively. The former prohibits any horizontal or vertical agreement between enterprises where the agreement has the object or effect of significantly preventing, restricting or distorting competition in any market for goods or services, whilst the latter prohibits an enterprise from engaging in any conduct which amounts to an abuse of dominant position. (Refer Chart 1) 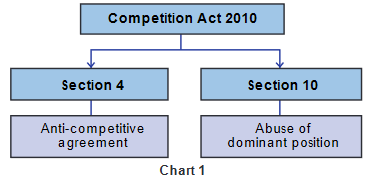 Note: For the purpose of this article, the authors will only focus on Section 10 of the Act, specifically the key factors taken into consideration by the MyCC in establishing whether an enterprise is a dominant player in its relevant market.

It is imperative to note that in assessing whether an enterprise has breached Section 10 of the Act, the MyCC will consider two (2) main issues:

What is Market Dominance?

Pursuant to Section 2 of the Act, the term “dominant position” means:

“a situation in which one or more enterprises possess such significant power in a market to adjust prices or outputs or trading terms, without effective constraint from competitors or potential competitors;”

The general approach adopted by MyCC in determining whether an enterprise is in a dominant position is by identifying the enterprise’s market share in the relevant market. As mentioned in MyCC’s Guidelines on Chapter 2 Prohibition, MyCC will usually consider a market share of above sixty-percent (60%) to be an indication that an enterprise is dominant.[3] Evidence on market shares may be derived from several sources, including[4]:

(a) data provided by enterprises in the relevant market – enterprises will be asked for their sales data and their estimates of the market shares of their competitors;
(b) trade associations;
(c) market research reports; and
(d) internal market review.

Market shares may be calculated in several ways, namely[5]:

It is also imperative to note that evidence of high market share in the relevant market may not be viewed as conclusive evidence that an enterprise is in a dominant position.

Instead it may be viewed as a starting point in providing an indication of the enterprise’s position in the relevant market.[6]

Pursuant to Section 10 (4) of the Act:
(4) “The fact that the market share of any enterprise is above or below any particular level shall not in itself be regarded as conclusive as to whether that enterprise occupies, or does not occupy, a dominant position in that market.”

As provided in the MyCC’s Guidelines on Chapter 2 Prohibition, below are some of the nonexhaustive factors which are also relevant in assessing dominance, namely:

(a) the degree of product differentiation;
(b) the likely response by buyers to price increases;
(c) the degree to which innovation drives competition;
(d) whether there are any barriers to entry. Barriers to entry include, but are not limited to:

Where there is “product differentiation”, market share figures may not provide a good reference guide to market share or power.

For example, high-powered sports cars are unlikely to compete in the same market as budget cars. So the MyCC would consider them as separate relevant markets for competition law purposes. On the other hand, the MyCC would possibly consider luxury sedans and similarly priced high-powered sports car to be part of the relevant market. Therefore, the fact that they are differentiated to some degree by function and that the kinds of buyer are different would have to be taken into account in assessing whether there is dominance.[7] Additionally, MyCC may also take into account, when assessing dominance, whether the said products contain any “must-have” status or locked-in technical feature, for example, Apple devices share the same operating system and platform, thence allowing syncing of data between those devices easy and straightforward.[8] On the other hand, due to the potential inconveniences arising in syncing data from Apple IOS to thirdparty systems such as Android, the current Apple users would inevitably remain and continue to utilise the respective unique ecosystem despite an increase in the price of Apple products as they have been indirectly locked-in technically to such products. [9]

Recent Cases on Breach of Section 10 of the Act:

Below are some recent cases on breaches of Section 10 of the Act.

(a) MyCC proposed to fine RM 17.4 million against Dagang Net

Dagang Net Technologies Sdn Bhd (“Dagang Net”) has been the operator for the Customs Department’s National Single Window (“NSW”) for trade facilitation since 2009.[12] As a result of the said award, Dagang Net was considered as having a monopoly for the trade facilitation services. In 2018, MyCC proposed to impose an RM 17.4 million fine against Dagang Net for allegedly abusing its dominant position in the trade facilitation services under the NSW.[13] In arriving at its decision, MyCC stated that Dagang Net had allegedly refused to supply new and/or additional electronic mailboxes to end users who used front-end software from providers which were not considered to be Dagang Net’s authorised business partners.[14] Further to the above, Dagang Net was also found to have imposed an exclusivity clause on its business partners which could essentially have the effect of distorting and undermining the ability of its competitors in the market.[15]

In 2019, the MyCC proposed to impose an RM 86.77 million fine against Grab Inc., GrabCar Sdn. Bhd. and MyTeksi Sdn. Bhd. (“Grab”) for collectively breaching Section 10 of the Act.[16] As a result of the merger between Grab and Uber in late March 2018, Grab was subsequently transformed and became the dominant player in the e-hailing and transit media advertising market in Malaysia. In summary, the MyCC found that Grab had abused its dominant position by imposing a number of restrictive clauses on its drivers which prevented the drivers from promoting and providing advertising services for Grabs’ competitors in the e-hailing and transit media advertising market.[17] In announcing the MyCC’s proposed decision on Grab, the MyCC chief executive officer Iskandar Ismail also commented that “the drivers are not their employees, they merely use the Grab app [to find passengers].

The drivers own their cars, so they should be able to do whatever they want with their own cars…this restriction from promoting others will distort the market, as it creates barriers to entry and expansion for Grab’s existing and future competitors…”[18]