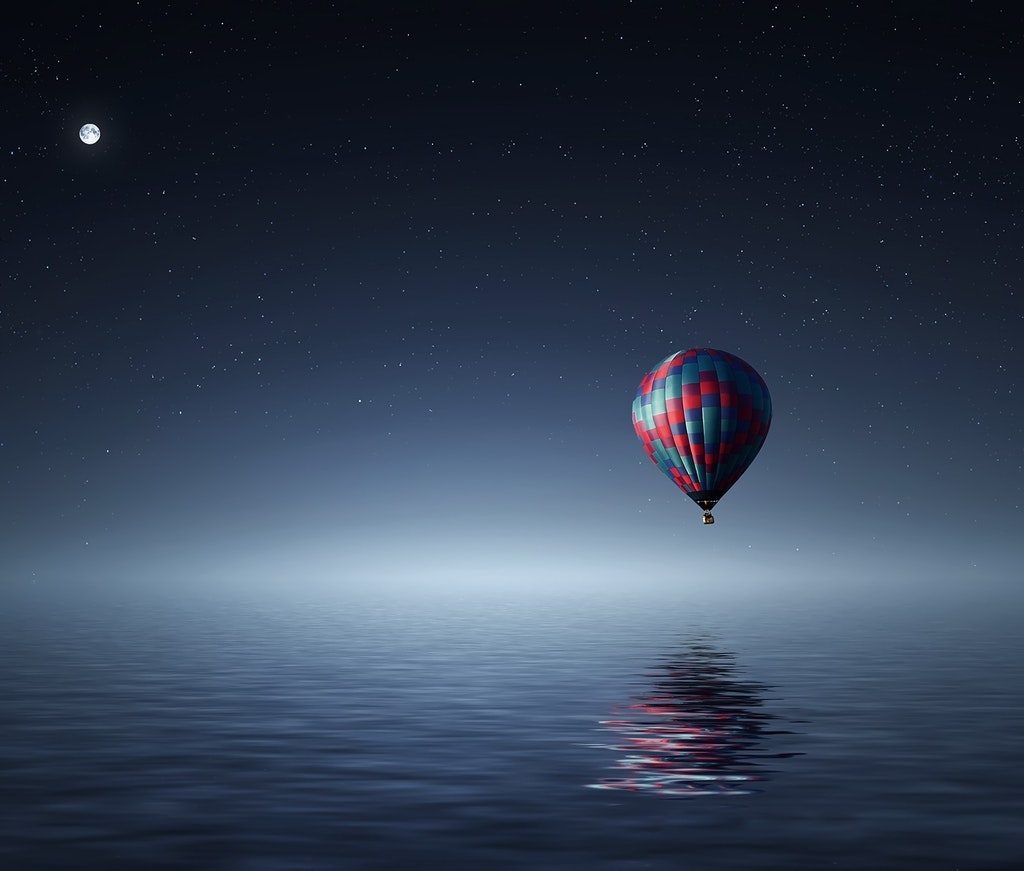 In light of the recent announcement by the Malaysian Minister of Entrepreneur Development that the technology required for a flying car prototype is already locally available[1], as well as the unveiling of a scale model of the Vector “point-to-point air transportation system”[2] at the Langkawi International Maritime and Aerospace 2019 (“LIMA ’19”) exhibition[3] coupled with the statement that a prototype of the Vector is slated to be ready to fly as early as June 2019[4], social and mass media are abuzz with the possible entrance of air mobility systems into the consumer market, which is especially alluring in areas with heavy traffic congestion.

The United States’ National Aeronautics and Space Administration defines air mobility as a safe and efficient system for air passenger and cargo transportation, inclusive of small package delivery and other urban Unmanned Aerial Systems (“UAS”) services, that supports a mix of onboard/ground-piloted and increasingly autonomous operations[5]. Based on this definition, air mobility thus includes both manned and unmanned aerial systems. Thus, notwithstanding the myriad of nomenclatures used to describe such mode of transportation, it can be seen that should the “point-to-point air transportation system” or “flying car” concept come to fruition, the resulting vehicle will fall under the category of air mobility systems.

Notwithstanding pre-existing civil aviation, in light of the novelty of air mobility systems in Malaysia, there are some short-term challenges and constraints faced by such systems. (Refer Table 1). Absent or inadequate laws and regulations are among the challenges and constraints faced by air mobility as a concept. That being said, it is humbly submitted that there are no laws and regulations expressly enacted in relation to air mobility, especially of the manned variety, per se at the time of writing. 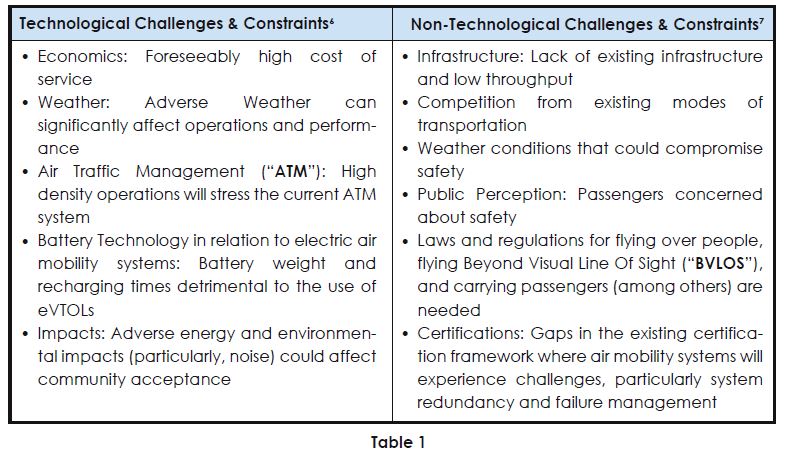 However, it may also be the case that the pre-existing Malaysian legal framework may sufficiently encompass the entire scope of operations of air mobility systems. First and foremost, it is pertinent to determine what air mobility systems or point-to-point air transportation systems are likely to be viewed as in the eyes of Malaysian law as it currently is.

Section 3 of the Interpretation Acts 1948 and 1967 provides that “aircraft” includes every description of craft used in aerial navigation, which admittedly is a very broad definition. Reference can subsequently be made to the First Schedule of the Civil Aviation Regulations 2016[8] (“CAR”), which provides for a general classification of aircraft as follows: 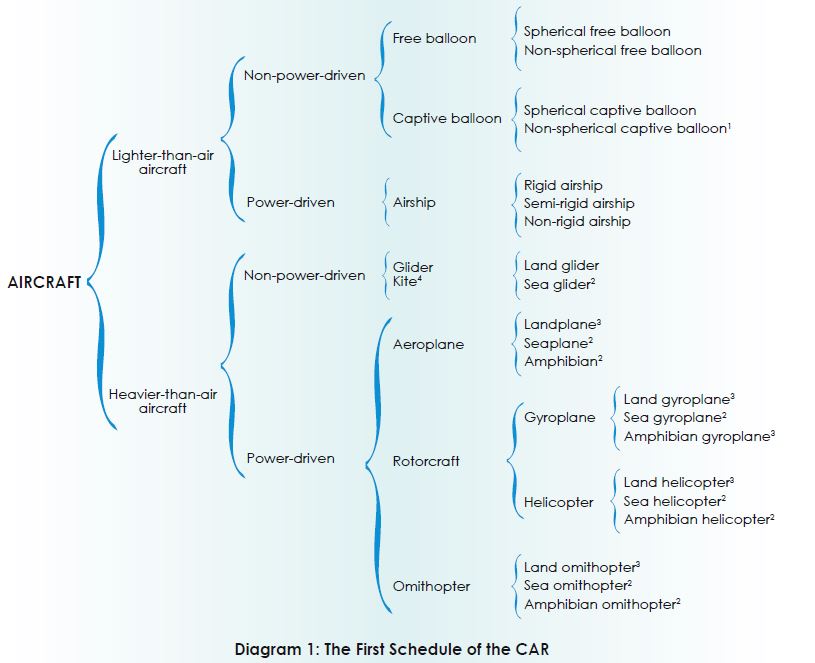 In light of the fact that the Vector point-to-point air transportation system as seen in the LIMA ‘19 exhibition is capable of powered flight in light of the four rotors propelling it as can be seen in Diagram 2 below, thus it is humbly submitted that the Vector falls under the category of a powerdriven, heavier-than-air aircraft. Even then, as can be seen in Diagram 1, that is still a broad category, encompassing various sub-categories such as aeroplanes, rotorcraft, and ornithopters. Thus, to narrow down as to what the Vector is considered in the eyes of Malaysian law, it would be wise to consider the definition of those three sub-categories. Regulation 2 of the CAR defines “aeroplane” as being a powerdriven heavier-than-air aircraft, deriving its lift in flight chiefly from aerodynamic reactions on surfaces which remain fixed under given conditions of flight, “rotorcraft” on the other hand is defined as meaning a power-driven heavier-than-air aircraft supported in flight by the reactions of the air on one or more rotors, whereas “ornithopter” means a heavier-than-air aircraft supported in flight chiefly by the reactions of the air on planes to which a flapping motion is imparted. Of those three, it is humbly submitted that “rotorcraft” best match the Vector point-topoint air transportation system. 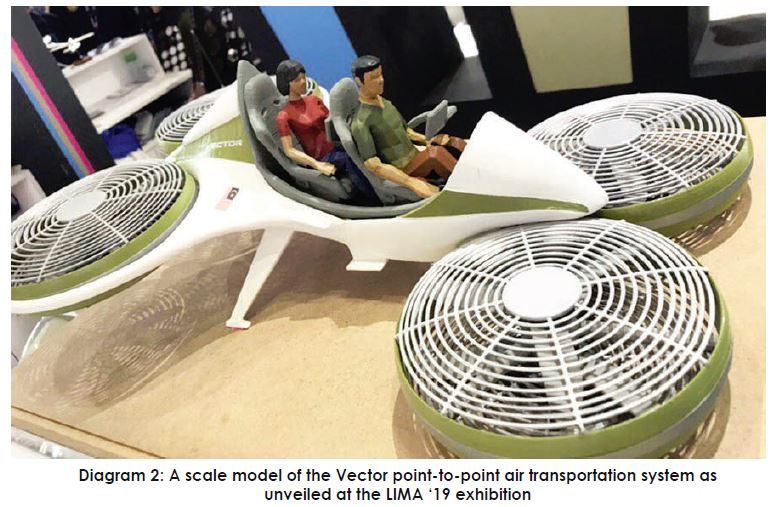 That being settled, it is relevant to highlight that with respect to civil aviation in Malaysia, there are generally two important criteria which need to be fulfilled in relation to the aircraft, namely that of registration as well as airworthiness, before such aircraft may legally take to the skies.

Of course, it also goes without saying that other laws and regulations must also be complied with and one must also have the relevant licence before one may pilot such an aircraft.

Regulation 4(1) of the CAR generally provides that a person shall not fly an aircraft in or over Malaysia unless the aircraft is registered in:

The manner of application for registration of aircraft is as provided by the “Airworthiness Notice – Aircraft Registration [Notice 7101]”[9].

Nonetheless, Regulation 4(2) of the CAR provides that a person may fly an unregistered aircraft if the flight begins and ends in Malaysia without passing over any foreign state and such flight is in accordance with the conditions of a permit to fly issued by the Director General of Civil Aviation.

Thus, based on the plain reading of these provisions, it can be seen that under the law as it is right now, generally aircraft will need to be registered with the Civil Aviation Authority of Malaysia before such aircraft can be legally flown in or over Malaysia.

The issue of registration aside, it is also worth highlighting that Regulation 26(1) of the CAR provides that no person shall fly an aircraft unless there is in force for the aircraft a certificate of airworthiness issued or rendered valid under

(i) the law of the State of Registry; or

(ii) under the law of the State of the Operator which has been transferred to it all or part of State of Registry’s functions and duties in respect of that aircraft pursuant to Article 83bis of the Chicago Convention; and

all other conditions subject to which the certificate of airworthiness was issued or rendered valid are complied with.

In the case of a Malaysian aircraft, the certificate of airworthiness referred to in Regulation 26(1) is a certificate issued by the Director General of Civil Aviation Malaysia[11].

Regulation 26(2)(d) and Regulation 29 of the CAR provides that a person may fly a Malaysian registered aircraft without a certificate of airworthiness if the person holds a permit to fly issued[13] by the Director General, which again, as stated in the section of this article on registration, is generally applied for in respect of continuing airworthiness of an aircraft by CAMO as referred to in the notices of the Civil Aviation Authority of Malaysia[14] or in respect of gliders, and thus should be treated as an exception rather than the general rule. Thus, generally a certificate of airworthiness is required before an aircraft can perform a legal flight in or over Malaysia.

As per the above, it is humbly submitted that point-to-point air transportation systems like the Vector, or other air mobility systems having a similar configuration, may receive the same treatment in the eyes of the law as rotorcraft, in particular, helicopters.

If that is the case, the point remains that the requirements of registration and airworthiness of such aircraft must be complied with, together with any other applicable requirements under the law.

Admittedly, in the absence of any express announcement by the Civil Aviation Authorities of Malaysia to the same effect, the submissions made herein are only in the nature of conjecture and speculation, the Civil Aviation Authority of Malaysia, or perhaps even the legislative, may deem it fit to amend or enact specific laws in relation to air mobility and/or point-to-point air transportation systems should it come to be a feasible concept, as was done for UAS.